Smoke detectors are lifesavers – and must therefore be able to do their job reliably in case of an emergency. Holders of the 'Q' quality seal, the new Gira Basic Q and Dual Q smoke alarm devices satisfy the higher quality criteria as per the GFPA 14-01 Guideline and DIN EN 14604:2009-02. ­Alarms are signalled by means of a loud, pulsating alarm tone and a red LED light ring. 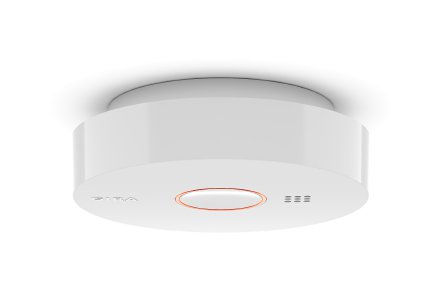 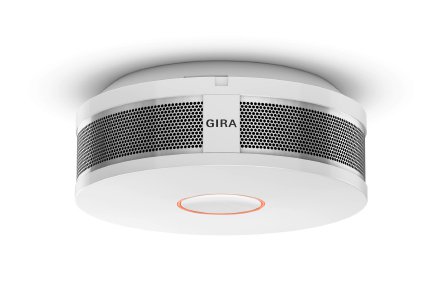 Gira offers Germany’s first smoke detector to combine two detection processes in one device: photoelectric scattered light measurement (processor-controlled) and heat measurement using a thermal sensor. This provides twice the protection for the family and home. Up to 40 devices can be networked with one another, so that a warning is issued throughout the entire building when there is a fire in any part of it.

A death caused by fire is treacherous. This is because people who die in a fire are usually victims of the smoke rather than the flames. Smoke often surprises people in their sleep when they cannot perceive a possible build-up of odour. Depending on the materials burning, this smoke can be extremely toxic. In extreme cases, it can be fatal after a single breath. In addition, smoke contains so-called corrosive particles which erode the lungs and airways. Victims who don’t die can be left with lifelong brain damage. In addition to the extreme danger to life, damage to property can also be enormous. Not only fire can destroy the building structure and furniture – smoke can as well. Nothing more than a smouldering heating fan can ruin all the furnishings. This damage is not reimbursed by any insurance company, because insurance only pays out in the case of open fire. There is approximately €4 billion in fire damage each year in the Federal Republic of Germany (source: Bavarian Fire Brigade Association). 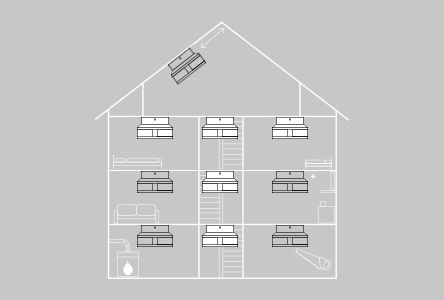 Where smoke alarm devices should be positioned to guarantee minimum protection varies depending on the design of the house or apartment. In single-story apartments, the hallway that is used frequently in case of fire should be part of the minimum configuration. In multi-storey buildings, the hallways of each storey must be included. However, it is advisable to equip all rooms for optimum protection.

Certified safety: Recommendation for the installation of smoke alarm devices

Smoke alarm devices are lifesavers – and must therefore be able to do their job reliably in case of an emergency. You must ensure that they are correctly installed for this purpose. In order to ensure that smoke alarm detectors are professionally installed in accordance with DIN 14676, the standard provides recommendations for verifying the professional competence of service providers performing the planning, installation and maintenance of such devices.

'Gira for the Home' planning tool

Gira for kindergartens, schools and colleges

Extras for the home

Gira uses cookies for websites in the gira.com domain. By using our website, you agree to the use of cookies. Our Data Protection Declaration contains more information about the cookies used by us or third parties and the ways in which you can deactivate cookies.